From time to time, there are urban legends that scare people about certain things. But in these modern times, do such stories still exist?

Recently, people are talking about a ‘cursed’ wallpaper picture that makes an android cellphone crash! A number of people tried to use the picture despite the warnings – and ended up getting their phones broken. Ouch.

The ‘cursed’ photo actually shows beautiful scenery. If you download the picture from a Google search or someone sent you the original file, then you use it as wallpaper on your phone, the system will crash!

Twitter user Ice Universe (@UniverseIce) posted the warning, telling everyone to never use the photo as wallpaper or their phones would crash. Netizens were also told to simply ignore the photo if someone sends it to them. It seemed that the problem is greatly affecting android phones, particularly Samsung brands.

But human beings are naturally curious, especially about things that are forbidden! Remember Adam and Eve with the forbidden fruit, huh? 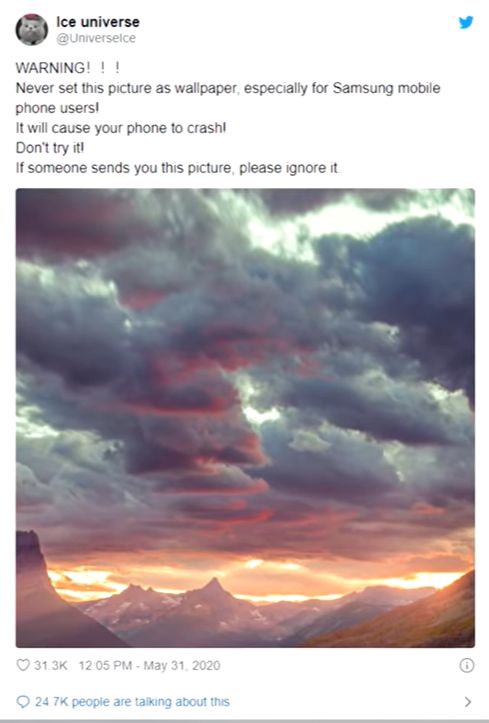 So, a number of Samsung users decided to give it a try – and quickly realized that the warning was for real! Whether a low-end phone or a flagship, the Samsung phones crashed after the image was used as wallpaper.

While some of the phones kept blinking on and off, the others won’t even turn on. Ouch. What’s worse, it seems that the only remedy for this problem is to do a hard reset of your phone.

That means that everything will have to be erased – and that includes all your pictures. For many users who rely on their phones for everything and had stored tons of pictures in there, the hard reset is such a heartbreaking thing.

So, don’t ever try to test whether this ‘cursed’ wallpaper will work on your phone. Unless you simply want an excuse to buy a new one, of course…