At just 5 years old, a girl named Jare from Nigeria has made waves online for her stunning beauty. People have dubbed her as the “Most Beautiful Girl in the World” and calling her the Black Barbie – that’s a huge compliment, by the way!

Dubbed as “Most Beautiful Girl in the World”, 5-Year-Old Girl named Jare 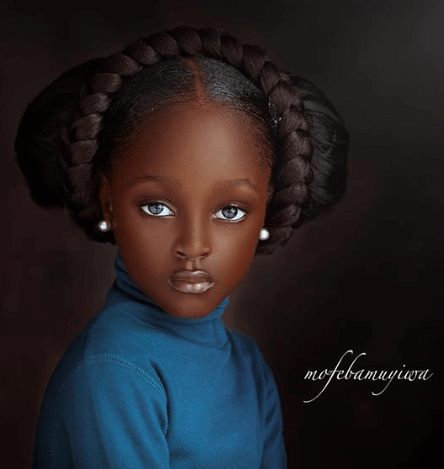 Jare became famous after Mofe Bamuyiwa of Lagos, Nigeria, posted some of her photos for a project. She stunned the internet, with many people saying that she would truly grow up to become one of the world’s most beautiful women! Would she become Miss Universe in the future? That wouldn’t be surprising at all.

“All I want is for everyone to see Jare’s powerful potential. I want the photo to speak to her when she has reached her adulthood,” Bamuyiwa explained after the photos went viral.

Though Jare wasn’t a professional model at the time, she would soon catch the attention of several brands who would ink a deal with her mom to get her as the new face of their products.

She would be signed up with the international luxury brand Princess Ford, a haute couture for kids.

Jare has gained so much popularity that her mother would eventually open an Instagram account that features her as well as her two older sisters who also have striking features that make the three truly look like dolls!

And while the IG account, The J3 Sisters, only has over 200 posts, the girls managed to wrack up over 162k followers! There is no doubt that these gorgeous young ladies could become even more famous in the future.

It’s quite inspiring that in this world where so many girls wish to become white, there are gorgeous girls such as Jare and her sisters who prove that there is no need to conform to what everyone wants. Black is beautiful – and that’s a fact!