As many people panicked over COVID-19, so many peopled rushed to the supermarkets to stock up on food to last them for weeks, plus other essentials. Governments issued lockdowns – and the people were scared that there will be no food in the coming days.

Even masks, hand sanitizers, and alcohols are sold out; though some did it to get more profit instead of just trying to protect themselves and their families.

When Minister for Defence in the Government of Ireland and Taoiseach Leo Varadkar announced the lockdown, people got scared. They panicked. Almost everyone rushed to the nearest grocery store and supermarket to buy as much food as they could, even filling out several cartloads of food and essentials!

This left many supermarket shelves empty, despite the announcement of Business Minister Heather Humphreys that there is plenty of supply for everyone. The scenes at supermarkets were chaotic. There were no more carts for new shoppers as the ones who got there earlier were still lining up with their haul at the counters.

But the sad truth was that it seemed like a race of sorts, a ‘survival of the fittest’ race. The younger, faster people got more of the groceries. Plus, they had the money to pay for their stash. Empty shelves greeted the weaker, slower folks. What would these people eat? 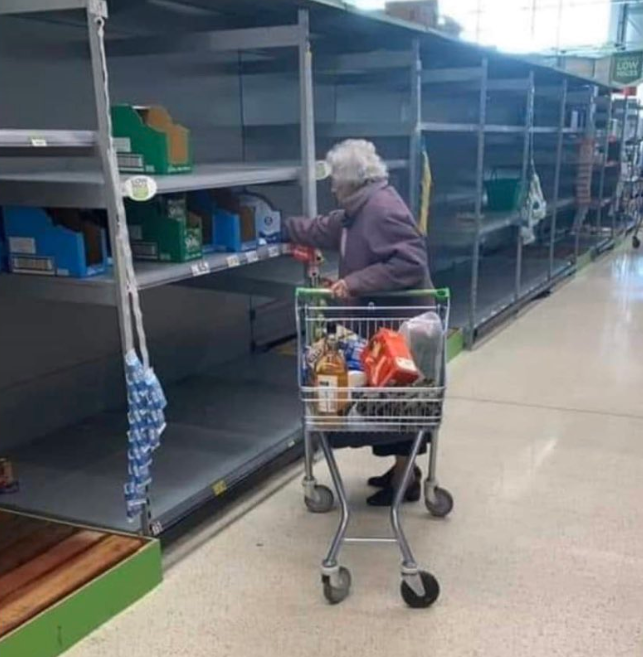 Deeply saddened by what he witnessed, 27-year-old Andrew Kiely, snapped a picture of an old lady looking helplessly through the empty shelves.

“This tells a thousand words! Relax with the panic shopping folks, I’m 27 and was stood in a queue for ages today. This woman is elderly and probably queued for ages also unnecessarily! Help out those who are vulnerable and don’t be so selfish! #Covid_19 #IrelandLockdown,” Andrew tweeted.

The picture went viral, with many people encouraging others not to panic and to see to it that there’s still food left for the weak and the elderly, especially. Plus, what good would it be to stash as many food as you can in your house if those will only rot after a few weeks?