In this modern world where the young people are often dubbed as selfish and part of the “Generation Me”, meaning they only think of themselves, it is always refreshing to read about stories of young people who prove the old generations wrong.

Indeed, while there are many young ones who feel entitled, there are also still a lot of young people out there who are chivalrous and unselfish, even if no one tells them to do things for others.

Just like this kid from China who went viral for being sweet to his tired mom while they rode a train. The unnamed kid could be seen standing and holding on to the pole in an obviously moving train. Beside him is a tired-looking woman who was fast asleep. But what’s quite noticeable is that this kid had his hand around the pole while his mom uses the back of his small hand as a pillow to rest! 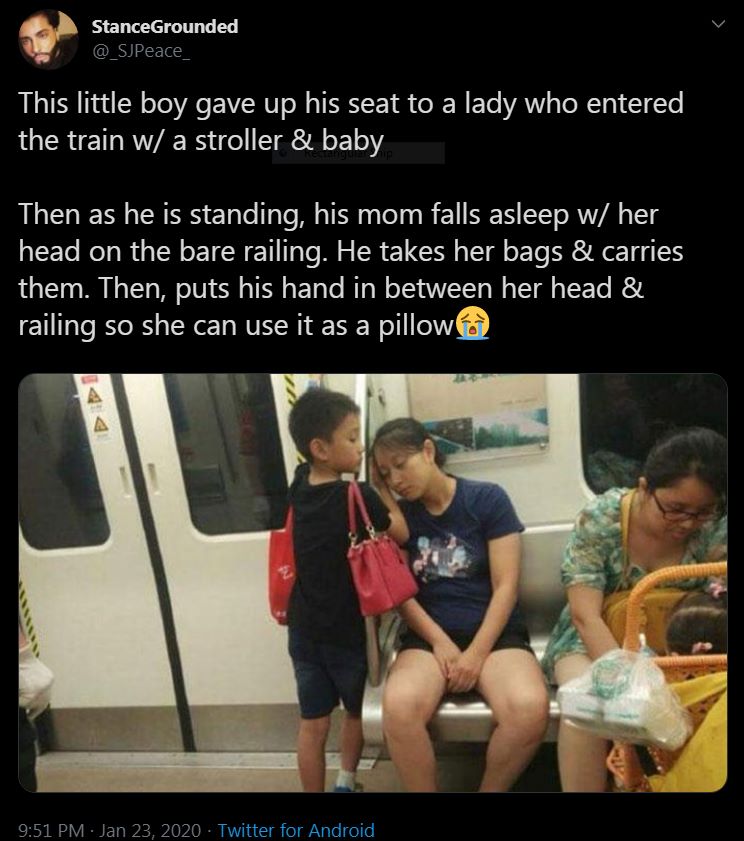 The sweet photo would go viral, earning this kid much praise on the online community.

But bystanders also had more to tell about this amazing kid. It turned out that he was sitting beside his mom when they initially boarded the train. But when a woman entered their carriage, pushing a baby carrier, this kid did not hesitate to stand up and offer his seat for her instead! Isn’t that impressive?

A lot of netizens commented that this boy didn’t have to give up his seat for the woman and her child because he’s still small and is entitled to his seat. There are surely others in the same carriage who are more able-bodied than him and these ladies (his mom and the woman with the stroller). Yet this kid was the one who offered his seat.

What a wonderful young man.